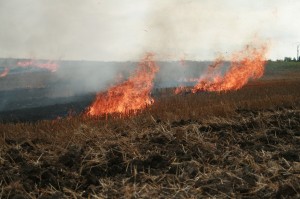 I could say nothing, just walk away
as if from a hotel room, leaving
the window open, a favourite dress,
someone asleep, and change all that;

I could seize the bicycle leaning
forgotten against an ochre wall
in the midday square, ride off to find
that track passed some time back

where the road bent round and the shadows
were cool and black in the light.
There’d be a search, a blurry photograph,
a reconstruction of the last known hours.

Yes, she bought bread here that afternoon.
After that I can’t be sure: the tremors
began at four o’clock and we put up
the shutters against the silent birds.

The ash was falling like burning snow.
There were strange colours in the sky
and so many refugees coming down
from the mountain with the same small bundles,

the same look in their eyes, that all in all
my mind was taken up with other things.
I know how to do that: blowing up
the hard-won years repeatedly

to know the possibility of zero,
of being a bare forked nothing.
Examining what’s left – the bits, the gaps –
to find out where I stand. The stuff I am.