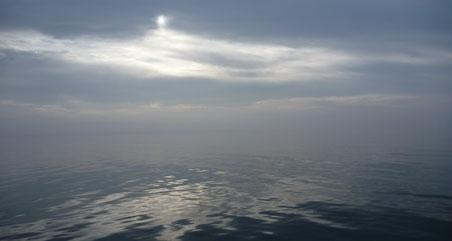 Her father embarked at sunrise
with a flask of water, a samurai sword
in the cockpit, a shaven head
full of powerful incantations
and enough fuel for a one-way
journey into history

but half way there, she thought,
recounting it later to her children,
he must have looked far down
at the little fishing boats
strung out like bunting
on a green-blue translucent sea

and beneath them, arcing in swathes
like a huge flag waved first one way
then the other in a figure of eight,
the dark shoals of fishes
flashing silver as their bellies
swivelled towards the sun

– yes, grandfather’s boat – safe
to the shore, salt-sodden, awash
with cloud-marked mackerel,
black crabs, feathery prawns,
the loose silver of whitebait and once
a tuna, the dark prince, muscular, dangerous.

And though he came back
my mother never spoke again
in his presence, nor did she meet his eyes
and the neighbours too, they treated him
as though he no longer existed,
only we children still chattered and laughed

till gradually we too learned
to be silent, to live as though
he had never returned, that this
was no longer the father we loved.
And sometimes, she said, he must have wondered
which had been the better way to die.